Google has just released the new Nexus website, where it reveals three new devices branded by them. 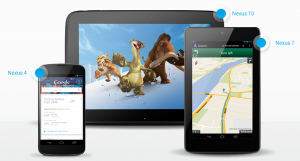 The first one is a new Nexus mobile phone called Nexus 4. It was manufactured by LG and is supposed to be the best Android experience available. That  means that my Galaxy Nexus phone might not be the best phone in the world any more. The new Nexus 4 has Android 4.2, which is not yet available for other devices.

The second model is a new Nexus 7, a second version of a seven inch tablet by Google. The same as the first Nexus 7 the second version is also manufactured by ASUS. However, as it can be seen from the web site, it has a 3G option which was not available in the first model. Also, it also runs Android 4.2.

The third device is brand new. Nexus 10 is a 10 inch tablet branded by Google. Note that Google didn’t have a 10 inch tablet before, so naturally they want to brag about it with a highest screen resolution of 2560 x 1600 pixels and a 300ppi, which is, by no accident, both higher than iPad 4. Nexus 10 was made by Samsung, so it would be easiest to compare to the new Samsung Tab 2 10.1. Nexus 10 will be running Android 4.2 – the same as both other models.

Note that all three models are not available worldwide, but in selected countries only (at least USA, UK, France and Germany). The other local Google Nexus sites still show (and sell) the older models: Galaxy Nexus and the first Nexus 7.