First I have received Andorid 4.2 update to my Nexus 7 tablet, a few weeks later (that being yesterday) to my Nexus phone. There have been a lot of posts about this and about what 4.2 brings, but mostly multiple users accounts, sphere camera, HDR and other effects with the camera and of course, a nasty bug. In Calendar app, the month “December” was missing from the picker.

Probably this is the reason why only a day after I got the 4.2 to my phone I received 4.2.1. The only known visible change (as it looks now) is that the month of December is back. Which is good, December starts in two days 🙂 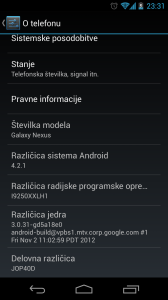