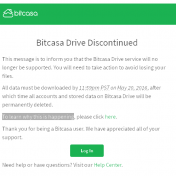 Bitcasa was a company that offered unlimited cloud storage – first in the world. Sure, the software was buggy and gigabytes of files got lost, but the users loved the idea of unlimited storage and helped find and report bugs in hope that the company would fix them to bring a good service. In return they didn’t get a better… Read more »

Today I realized that the new version of Bitcasa for Android (version 2.7.4) adds support for Chromecast, HDMI media player from Google. There is still no news about this new version on the official Bitcasa web site and info on Google Play is somewhat short. It just says “Chromecast support! Cast videos, music and photos with the touch of a… Read more »

I’m not sure if I’m supposed to share this or not, but I got the link from Bitcasa support and the link is public, so… And most of all, it could help other frustrated Bitcasa users with their problems as well. The preview version of Windows Bitcasa client version 1.1.3.22 should bring some more stability to mirrored folders (says support)… Read more »