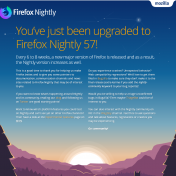 The brand new Firefox 57 – which is right now only available as Nightly Alpha version – is a very fast browser. The speed increase is obvious with a naked eye and very welcome.Firefox was becoming slower and slower, partly because of it’s support to older technologies. One of those are add-ons which enabled magical things that add-ons for other… Read more »

I was excited to try the new 64 bit Firefox as I read the news that it was released as a final version. After all, I’m using 64 bit Windows for some years now, and browsers have been very late to release their 64 bit versions. Read on how I compared if Firefox works better in 32 or 64 bit… Read more »

This week there has been a lot of news about Chrome passing Internet Explorer as the most popular browser. This was supposed to happen in the week ending May 20, so I have decided to check this on my own sites and for the same week. I chose some of the sites that have the most traffic so the numbers… Read more »