It has been a month since Asus has released firmware to Asus ZenFone Max Plus that included Android Oreo. I was lucky to be stranded on a tropical island with no connection so I couldn’t install it because it turn out the new firmware is a disaster. The numbers od users comlpaining in the forum spiked and they were quoting many different problems with the build. You can read about some in my post of Oreo update and in my warning not to update the phone, but the list is not complete.

New errors and bugs are constantly being found and many users had to buy a new phone because the update has made the phone useless. I’m not exaggerating here: if your phone can’t connect to 2G, 3G or 4G, is it still a phone? If it gets so hot you can’t hold it, is it still usable? If the battery dies in a few hours, is it still a mobile phone? By all definitions, it’s not a usable mobile phone. And if people rely on them for business, well, it’s cheaper to get a new phone than lose customers with the sad excuse for the “Battery king”.

Replies from the forum moderators are pathetic at least, urging people to factory reset the phone, clear data in apps, change a SIM card or some other “turn it off and on again” help that usually call centers are trained to suggest.

I have even noticed that besides helpful Emilee, a regular Asus moderator on the forum, and the unbelievably rude Bill, a new moderator is replying to messages. Selena so far managed to only copy and paste standard replies, but it might be an indication that they need more staff for handing bad press.

The most useful replies are the ones where they acknowledge the problem and write that they had let the developers know about it.

After this month of being stuck on the Oreo build a new build arrived on December 18, firmware build 15.02.1810.380. If you were unlucky to get Oreo in the first place, there was nothing to lose by upgrading. If you stayed on Android 7, don’t get your hopes up that you should have Oreo.

The official build page has very little details on the content of this update:

Users who had bricked phones by the update to Oreo from November jumped at the 15.02.1810.380 to see if the notified developers fixed any of the many things reported. They installed the update and realized with tears in their eyes that the bugs are mostly all still present. The phone still drops connection, it still gets hot, apps still crash and battery time is still poor. Which probably means that the release notes were probably correct – none of the huge issues with Asus Zenfone Max Plus (M1) were fixed in December.

The answer is very easy and consists of the options:

I am still on Android 7 so I haven’t updated yet. I have actually no plan of updating until the errors are fixed, and I guess that by that time I will own a new phone already.

Has Asus abandoned Zenfone Max Plus?

I think the answer to this question is NO. Asus has not abandoned ZenFone Max Plus.

The new build has number 15.02.1810.380, the previous build was 15.02.1810.347. Note the last number that jumped from 347 to 380. In theory that means that they have built 33 builds before releasing it. That means one build a day if not more, and that indicates of active development. Sure, it might still be just security updates this time, but at least it looks like they’re aware of the bugs and are trying. It doesn’t mean that the M1 will get any better, but there is at least one person at Asus who has this goal.

We’ll see if they succeed.

When is the next firmware update for ZenFone Max Plus?

The next firmware update for ZenFone Max Plus should be released sometime at the end of January 2019. If they continue building at this pace, the version number should be around 15.02.1810.410+. 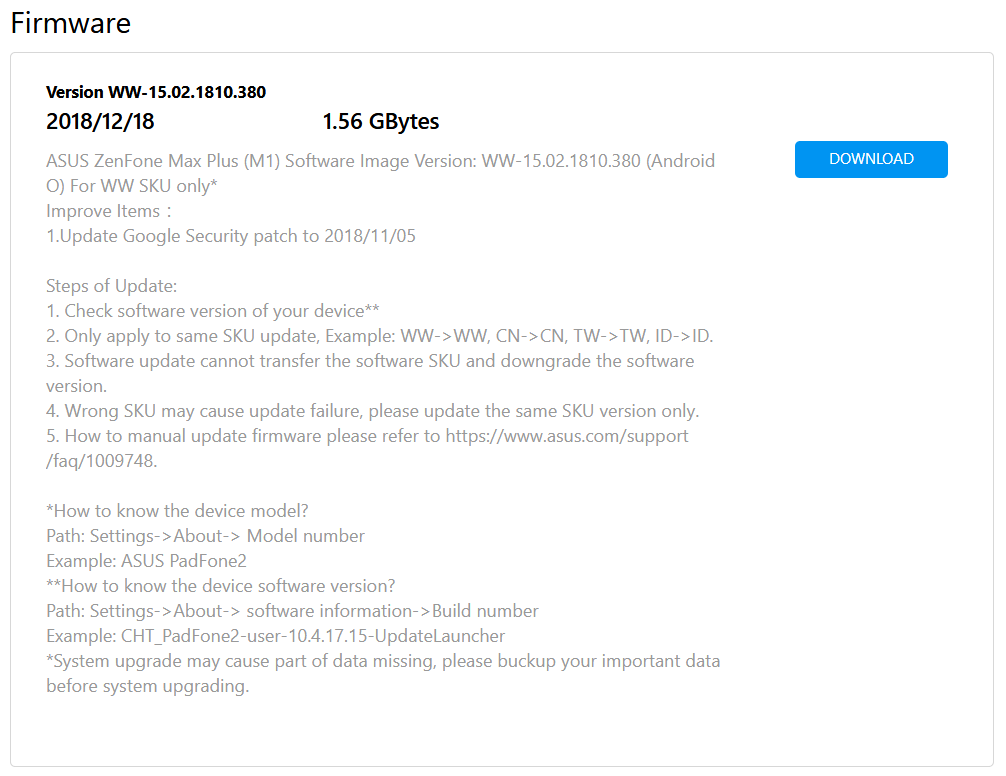