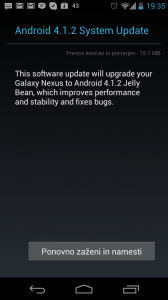 The upgrade went smooth without problems. What does 15 MB large update bring? Whats new in 4.1.2? Not much. The main reason  for the upgrade are supposed to be new drivers for a new chip in upcoming versions of Nexus 7, but other changes should include performance improvements, bug fixes and improved stability. 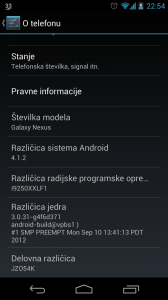 The “improved stability” feature is a little tricky – I have never had any stability problems on my Nexus 7, but after installing the upgrade it restarted several times when turning wireless on or off. Also, I feel that the performance is a little worse than before, I feel that the tablet runs less smooth. However, this is not measured and can be subjective.

Google suggests to get the upgrade. Note that the update is available for Google tablets and phones and not for other manufacturers like Samsung. There have been no news if the update will be available for other phone models as well.