I (and many other owners of Asus ZenFone Max Plus (M1) too!) used to be frustrated when Asus released a crappy update to Android Oreo and then hasn’t released a fix for it. Not in January, not in February, not in March.

No firmware update for ZenFone Max Plus in May

May 2019 is here and as expected April passed by without an update for Zenfone Max Plus M1. I’m following the official support forum at Asus ZenTalk for ZB570TL (ZenFone Max Plus) where owners of the phone try to find fixes for the bugs, workarounds and most of all info about the next firmware update. Replies from Asus seemed to be sympathetic at first (by Emilee_ASUS), rarely informative (by bill2_chang_ASUS), and since Android Oreo disaster completely useless (by Selena_ASUS).

It seems not only the firmware isn’t getting the attention it needs, but also forum members got downgraded to only Selena_ASUS support level. As described in my previous posts, that level means “factory reset your phone” for every kind of problem.

Support has a test model!

From the April replies by Selena_ASUS we have learned something new. Something not mentioned before, but in April replies a couple of times. The support team has gotten its hands on a “test model”. Apparently they are having a test device (one?) where they confirm all the bugs and since they don’t replicate them, they discard them – case solved!. Here are two examples:

The problem can’t be replicated in test model.

After checking the test model, it shows “Portable Wi-Fi hotpot” in English language .

Please note that the above type in “Wi-Fi hotspot” isn’t mine. It’s a direct quote.

Yes, in a couple of days the latest security patch for Max Plus M1 will be half a year old. So much for a secure device. 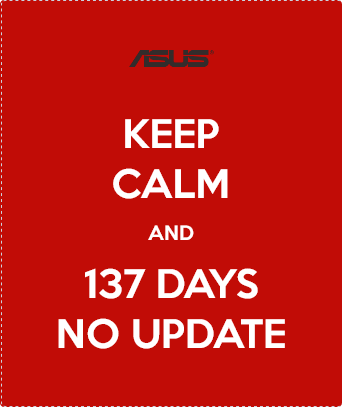 Is Zenfone Max Plus abandoned by Asus?

The phone was released in December 2017. Last update was in December 2018. It seems highly improbable that Asus would abandon its “Battery King” only one year after release. However, if after 12 months of updates there are 6 months missing, it’s difficult to call it by another name.

Asus is trying to persuade the owners that the phone is far from abandoned. They claim there is active development going on, sometimes claiming that Android Pie is just behind the corner.

Current news by Selena_ASUS is dated April 22, 2019 and reads like that:

For new update, we are actively preparing and conducting tests to ensure optimized performance of the system.

But despite all active preparation and tests the update doesn’t seem to be ready. Here is Selena_ASUS on April 30, 2019:

We have no official confirmation on the release date

Officially the phone isn’t abandoned. Practically it is.

I’m following posts by the owners of this phone model on the official forum. Let me say the feedback is not positive. Not now (with no updates), not before (with failed Oreo update), not at release (battery performs poor).

From what I have experienced with my first Asus phone, they are right on spot.