Today I have run NPS after a long time. I have stopped hoping that my i7500 phone will get an update, so I don’t check for new versions anymore. However, I sometimes charge my phone over USB and that is when the NPS runs by itself. Of course, I check the Update icon just in case 🙂

Today I was surprised (no, it was a new version of firmware, sorry) – the NPS offered a new version of NPS. That is something that never happened even when there were new versions available. The new version, according to the NPS, was NPS Full update 1.5.1 A@w_2. I can’t really decode what the name means, but it’s supposed to be fresher than the outdated version 1.4.0 IL2 that I had on one of the computers. 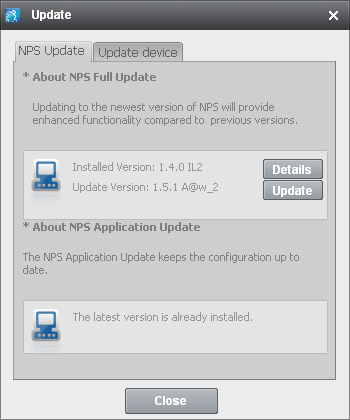 I tried to auto update it, so the program asked me if I want to close it down in order to install. I confirmed, the program closed down and nothing happened from here. I guess I will try to update in manually.

I am glad that there are new versions of NPS. At least I get a signal from Samsung that there are actually some people alive and working for our phones. I would love to see at least Android 1.6 if not 2.2 on my now outdated i7500 phone.