There have been many requests for upgrade to Android 4.4 and many angry users who demanded it in the official Lenovo smartphone forum. In the end of June Lenovo admin finally announced that the update is supposed to come in July. It looked to good to be true, but the update actually started rolling out via OTA update in the end of July. 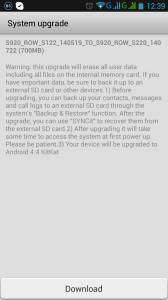 The update is actually not really an update, but a complete ROM. The installation flashes the phone, so all the data in the phone memory (excluding SD card) is lost during the upgrade. Was this really necessary? As you’ll see in this article, there was one huge improvement because of this.

And to be fair, the upgrade gives a warning that all the data will be deleted and that a backup should be made. I made a backup of all available items (phone book, recent calls list, SMS messages, apps), but when I tried to recover, the option to recover apps was missing. Which means installing the apps from Google Play.

The update with the ROM is big. The download is 700 MB and it takes some time to download from the Lenovo servers. There is an option to pause the download and continue it later, which is helpful when you have to go somewhere with no WiFi in the middle of download. 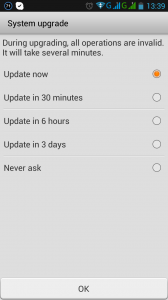 After the download there is an option to delay the upgrade or do it ASAP. The upgrade showed some warnings but apart from that went completely smoothly. Some users on the forum report having some problems with it.

After the install I was a little surprised to see a completely new home screen, new icons, new software (and no apps), new ways to unlock and lock the phone, new camera,… Lots of things.

So what features does KitKat bring to Lenovo S920?

In a week of use, some of the features are nice, some aren’t. The phone seems a little slower, but I have no numbers to back that up. I’m sure the camera is much, much slower. Lets take a look at positive things and then the negative ones. 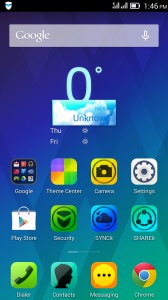 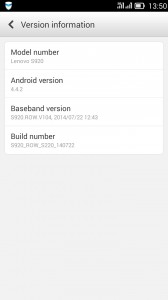 Even if the lists aren’t equal in length, there is still many more and more important positive things, so the update was a correct decision for me. I have a new phone (software-wise) and I’m (again) happy with it.