I’m writing this post with a new feature in Google Docs. Actually, I’m writing it on Chromebook. The new feature in Google Docs is called Voice typing. That’s means that I’m not using the keyboard to write this post, but I’m just speaking into my Chromebook. It’s difficult to get used to it, but it’s highly useful and fast. I can’t type with 10 fingers, so speaking is much faster. Sure, there are some mistakes in the text, but it’s so easy to correct them either with a keyboard or deleting them and saying them again. This feature is also much more useful than voice typing on android keyboard because it just waits for you when you think and it doesn’t stop listening. it really is a helpful tool and I hope I’ll be using it more.
Unfortunately it doesn’t work in many languages, at least not with punctuation. And without punctuation it’s pretty useless because you have to edit the text in any case later. For sure it’s a step in the right direction and already a very very useful feature. We just have to get used to it.
To sum it up, Google released Voice typing for Google Documents. It currently works only on Chrome browsers across all platforms.

Please note that voice typing is also fun: I wanted to finish this post already but I just keep talking… 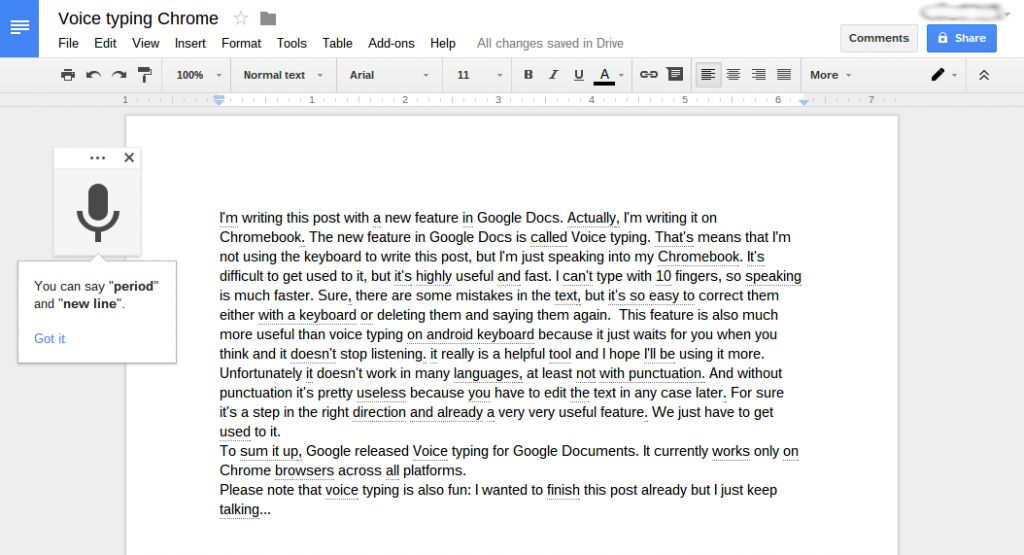