With this tool, you won’t have to rebuild your circles, and people who’ve already added you to their circles will automatically be connected to your new profile.

Remember, this was on October 27 2011, when Google enabled Google Plus. They wrote about the dates when the migration tool will be available to the users:

I have also written about this on my blog.

After not few weeks, but almost nine months, the migration tool is now available. It copies all your circles and your contacts from one account to another one and if you have circles with the same name it will merge them in the target account. The tool looks similar to the tool that is used to move the services from conflicting accounts (gtempaccount) and can be only used once per six months on each account.

The Migration tool is a part of Google Takeout and after logging in it can be started by selecting “Circle: Transfer your Google+ connections to another account”.

It takes seven days to start the transfer and then two more days to finish it, so you can migrate all your contacts and followers in nine days. It’s not fast, so you better get started as long as the tool is still available! 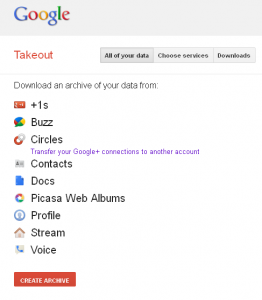 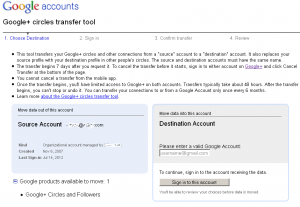 The migration tool looks similar to the account merge tool