I’m pleased to have attended the Intel AppUp event in Berlin. The event was synchronised with the IFA fair that took place in Berlin the same week. The purpose of this AppUp event was to introduce developers to the ultrabook platform and the development of Windows 8 software that would eventually be published to the Intel AppUp Store that features software for existing and upcoming platforms.

The event was interesting, there has also been a hands on demo and an evening hacking session. Intel has shown that they really mean it with ultrabooks and has given every event participant a free ultrabook with impressive specs. Here is mine: 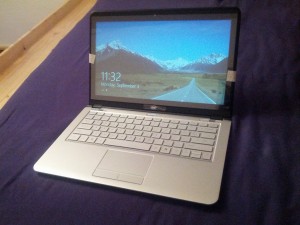 So, before I get to specifications, just a short explanation of what an ultrabook is (or should be).  Intel says:

An Ultrabook is a new category of computing devices that will increasingly give us the most complete and satisfying, no-compromise and more secure computing experience in one, sleek and portable device.  Ultrabooks have great battery life and offer  mainstream price points.

To try to explain this in more human friendly way, an ultrabook is a next generation notebook, that is thin and light, starts and works as fast as possible, has a fast (Intel!) processor and you shouldn’t have to think about charging its battery all the time. Sounds great! Besides that, the idea is that the ultrabook should have the same sensors as smartphones or tablets: multi touch screen, GPS, accelerometer, webcam and similar sweet things that make smart phones so smart. You can read more about ultrabooks on Wikipedia.

So what kind of ultrabook this we receive? First of all, it is not and it will not be available for sale, ever. It’s a developer model, which means that it’s more powerful in some perspectives and less complete in others. It comes with 13,3 inch multi touch screen, Intel Core i7-3667U processor, 180 GB SSD disk from Intel and 4 GB of RAM. It has a webcam, GPS, accelerometer, magnetometer and gyro meter. My experience is that the battery lasts between 4 and 9 hours, depending on how heavy I use it. The ultrabook was pre-installed with 64bit Windows 8 Release Preview (which was already outdated when I received it, because RTM was already available). There was no development environment, so I had to install Visual Studio 2012 RC separately.

This ultrabook is quite powerful and pretty fast. I love the Windows 8 ultra fast startup time – it starts in less than 15 seconds, wakes up from sleep in no time and starts from hibernation in less than 8 seconds. Impressive, but I was expecting speed like that from the use of Windows 8 on my first tablet. It also works fast when working; the SSD disk and i7 processor help a lot for great responsiveness. Its keyboard is pretty good, typing is quite fun. Unfortunately the screen is pretty reflective, so there are a lot of fingerprints on it from touch functionality. There are (only) two USB slots, but there is not much need to attach other devices to the ultrabook since it has the majority of them already inside.

Above all, it’s a great computer and even a better platform. I have already developed some sample apps for Windows 8 and they are quite fun to use, even if very basic. And the touch functionality of the screen makes me miss it when I’m using a regular computer with Windows 7 or XP. I believe that touch will dominate notebooks soon, and I sure hope they find something out against the fingerprints.