Today I bought a new (old) 17″ LCD monitor and decided that I too will have a dual display on my desktop. At first I wanted to buy another graphic card, but I figured out that my on-board GeForce Nvidia 7050 PV works like two independent graphic cards and has two outputs, one VGA and one DVI. So all I needed was a DVI cable for my new (old) monitor and some free space on my desk.

I plugged in the monitor and tried to play with the settings. I knew that I wanted one monitor as it was (landscape) and the new one in horizontal position (also called pivot or rotated). At first this didn’t work – the graphic card driver insisted that the desktop should be twice as wide and both monitors would display the same desktop, just split between the both screens. All other options were useless – clone, which displays the same desktop on both screens or single view which made turn one screen off. I also tried rotating one desktop, but all I could do was rotate both or none, which was useless for me.

I decided to see if someone had the same problems and read a half of hour of forums. I even installed some software (Ultramon and Pivot Pro), but I didn’t believe they could solve the problem – they both work on top of Windows, so the graphic card should tell Windows there’s two screens and not just one. I was right, they didn’t help at all.

On one of the forums I read about the problem and a ‘miraculous’ solution: there was a problem and some time later it was gone, but the user didn’t know what solved it. I thought of the most typical of the solutions: restart my machine! After restart, the Nvidia driver offered a new option, Dualview (independent monitors). I selected it, rotated the desktop (only one) and it works like a charm now.

I can proudly tell you that I am officially in the dual monitor club now 🙂 Above all, the free space on my desk was the hardest thing to get. 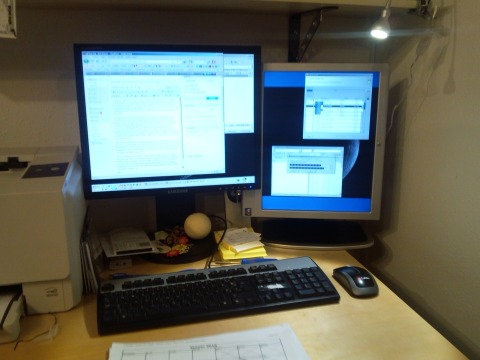